Due to changes in the patent cliff over the next 5 to 6 years, an enormous opportunity to develop “generic” versions of biologics, more commonly known as biosimilars has occured.

In this white paper we focus on some of the key issues which should be considered when performing pharmacokinetic analyses to prove clinical comparability between innovator biologics and recently developed biosimilars. Topics covered include:

To receive your free copy, please fill out the form on the right. 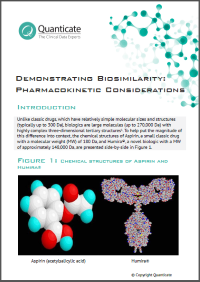