The majority of companies within the Pharmaceutical Industry have large historical clinical databases, much of which may never be used beyond its original purpose: to prove that the drug in question is safe and efficacious. This historical data can be used to better inform future decisions in clinical trials.

A project was undertaken to develop a tool investigating subjects only receiving placebo in 82 Phase 1 single and multiple ascending dose studies between 2005 and 2012. This project, undertaken entirely in R, had the aim of automating the production of a set of documents for clinical and non-data facing staff, providing information on observed data of the following data types:

The use of large scale meta-analysis of placebo subjects gives the opportunity to explore the factors linked with occurrences of adverse events or the effect on safety parameters without the interaction of study drugs. This information can be used to influence future study designs by identifying appropriate covariates and underlying causes. It also has the potential to build a Bayesian prior for interpretation of clinical drug effects in small Phase 1 studies. Using this prior information can reduce the overall costs and improve the certainty of decisions made during early drug development.

All examples given in this blog are on simulated data.

For tests where reference ranges are not available, placebo data gives information on the expected ranges with the ability to adjust for the effect of covariates, population structure and study type. An example is shown in Figure 1.

Early stage clinical trial populations are different to the general population. In Figure 2, the effect of different covariates fitted from a series of single factors models are estimated from the historical phase I population. 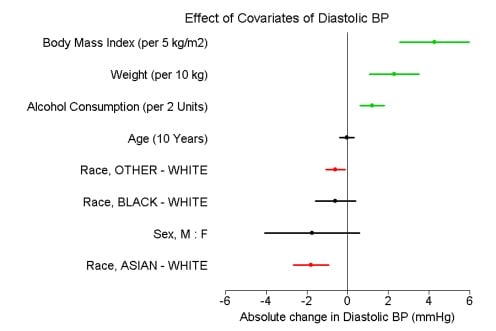 Due to the nature of the data, there were many problems to overcome:
●  Standardisation of laboratory units
- Large amount of tests (180+) in different countries using different assays/units
- Lack of a conclusive source for SI Units
●  Classifying studies
- Study type covariates were required to distinguish single/multiple dose and studies with special populations
●  Identifying unique subjects
- Subjects taking part in multiple studies

Using Data as a Bayesian Prior

Historical data can bring huge benefits when used in a Bayesian Analysis as prior information; reducing overall costs and improving the certainty of decisions made during drug development.
Adverse event data can be used to create predictive distributions to give information on the expected rates of AEs within a new study. Figure 3 gives a 95% credible interval of 0.2% to 24.8% for the proportion of subjects in any new trial having the AE of interest.

Figure 3: Prior and predictive distribution for occurrence of AEs

This blog has shown that historical placebo data can play an important role in future clinical trials by:
●  Providing prior data for a Bayesian analysis
●  Giving a broader context around observed data in a study
●  Understanding the impact of covariates
●  Estimating reference ranges