Sometimes you may need to restructure your dataset to move data from columns into rows, and vice versa. Two methods for doing this are using the transpose procedure or creating an array.

For example the code below will create a dataset showing the number of hours worked by each employee. The structure is one record per employee per day. 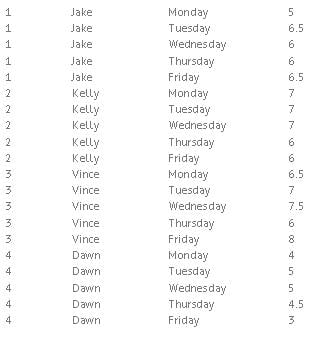 We want to restructure this dataset to instead contain just one record per employee, with a separate variable for each day.

This could be done by using the SAS proc transpose command:

This could also be achieved by using an array:

Both sets of code will create the desired dataset:

However there are some distinct advantages and disadvantages to both:From this example both methods can be used to achieve the same result. In general it will just be personal preference to which method statistical programmers will use.

In order to compare the running speeds I have run equivalent code for both methods on the same large dataset within server SAS version 9.1.3. The dataset contained 10140 observations and with 37 variables to be transposed. Code for each method was run five times and the average real times and average CPU times from SAS were calculated and recorded in the table below:

Personally I prefer using proc transpose if all that is needed is to restructure a dataset. I find it simpler to use and much easier to remember the syntax for. The table shows that both the real and CPU running times from proc transpose were faster than that of arrays, taking less than half the real time to run. This suggests that proc transpose is the more efficient method to use.

Which method do you prefer to use? Can you think of any other advantages or disadvantages of either?